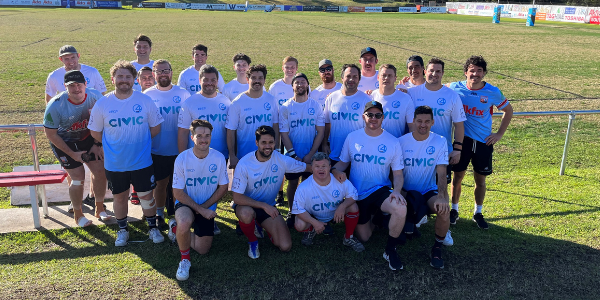 All champions start their day with a full breakfast. That’s how Damian and David (a.ka. Doc) start their day together, each Saturday, before heading to the Southern Districts Rugby Club, where they are both part of the team.

Being part of a team can have a transformative impact on people’s lives – connecting people with their community, boosting their confidence and empowering people to realise their potential.

Doc, an NDIS participant and Civic client, and Damian, Practice Leader at Civic, know this from personal experience.

Damian has played for the Southern Districts since he was in primary school, starting out in Juniors and now currently playing and coaching the club’s fourth grade team. Doc’s Southern District’s journey started in early 2021 when he first joined the team to support as a ‘runner’ during training and the games.

But Damian and Doc didn’t meet at the rugby club, Damian has been working with Doc, initially as his support worker, since 2017, helping him achieve his goals while also giving him the support he needs. Over the years their friendship has grown, built on a solid foundation of trust and ‘mateship’.

One of Doc’s goals over the past couple of years has been to join a community sporting club – a goal that goes hand in hand with his well-known love of sport.

Knowing full well the benefits of being part of a team, and to support Doc in achieving his goal, Damian asked Doc if he would like to be part of the Southern Districts club.

The trial was a hit, Doc absolutely loved it and so did the team.

Doc quickly became one of the ‘boys’, taking on his role and officially being named “head hydration manager” for the Southern Districts fourth grade rugby team.

Unfortunately, due to the Covid-19 pandemic the sporting season was cut short and, after a handful of games, the club had to cancel what was left of the season. But it didn’t dampen Doc’s sense of pride and happiness, and the achievement he felt by becoming part of the team.

Fast forward to today: the 2022 season is up and running, and with round 13 taking place this weekend, Doc is a well-established part of both the Southern Districts Rugby Club and the team. Doc’s role spans the whole morning – from the pre-game preparation, warming up in the gym, to the game itself and, of course, the post-game celebrations.

“It’s really exciting that we are able to continue to support Doc on this journey and have him be part of team,” says Damian.

“Each week you can see his confidence out on the field grow, as well as his friendships with the team and members of the club.

“As Doc walks through the Club and out on the field, he is greeted with a sea of handshakes, pats on the back and waves of hellos – everyone is friends with Doc.”

When the game starts, it’s down to business for Doc. Taking up his position on the sidelines, Doc takes his role seriously, constantly monitoring the water bottles, refilling, and running them out to the players during breaks in the game. Doc is also quick to motivate and cheer on the players and he is one of the first to shake their hands post game.

Thanks to Civic’s involvement in the team, Civic was recently offered the opportunity to support Doc and the whole team as an official sponsor – helping to provide the team with a training set and playing shorts.

“We are proud of Damian and Doc’s achievements, and grateful for the club’s support in helping Doc’s goals become a reality, so we are pleased to be able to support the club by sponsoring the training kit,” says Bronwyn Afflick, regional operations manager.

Civic’s partnership with the Club also demonstrates Civic’s commitment to building inclusive communities and cultures, inspiring others to participate in local sporting teams.

There are five more rounds in the 2022 season, and we encourage everyone to get down to one of the home games to support the team.

Next Southern Districts fourth grade game is on 9th July at Foreshaw Park.